Wednesday Medley: What's in a name?

Playing along with this week's Wednesday Medley! 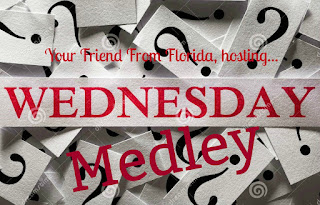 1.  Today is "National Joe Day".  Who is your favourite "Joe/Jo" and what can you tell us about him or her?
It is funny, I've been thinking of my grandmother this morning (today marks 8 years since she passed away), and I was remembering how if she was fond of someone, she would speak of them with such a smile and twinkle in her eye.  One name she used in such a manner was "Joe Smiley".  I can't honestly tell you who Joe Smiley is/was other than he was a relative, and she obviously was very fond of him because I can just hear her voice saying the name "Joe Smiley."

2. Who were you named for and do you or did you know that person?
My first name is just a name my mom liked, I guess.  My middle name is my mom's name.  More on that below!

3. Do you have a middle name and do you like it/use it?
Yes, my middle name is my mom's first name, Elizabeth, and I do love it!  It's apparently a popular middle name; I've heard many who have the same middle name as me.  My mom is really the only one who uses it though, if she's scolding me she'll say, "Jillian Elizabeth!!"  Some of my fellow curling buddies were trying to figure out my middle name last week, and I have no idea why lol.  They were guessing whether it was my mom's name or my aunt's name.  One of them just called out, "Jillian Marion!"  And I was like "huh?"  And he said, "No? Is it Elizabeth?"  Jillian Marion doesn't sound right together, so I guess I'm glad it's Elizabeth. haha!

4. Have you ever named your car?  Tell us about it!
My dad had a ritual of naming his vehicles after the people he bought them from - in later years, he had second-hand trucks named Jimmy, Maurice, and Neil, respectively. lol!  So I bought a Toyota Rav4 from my aunt and uncle, and named her after my Aunt Linda.  Then with my current car, the saleswoman I dealt with had the last name "Purdy" so I named my car that.  It's tradition!

5.  Tell us the name of a fictional character you have never forgotten and why you remember it so well.
Despite the fact that I read a lot, I struggled to come up with an answer to this one.  Apparently I forget characters' names easily?!  I'm going with Boo Radley from To Kill a Mockingbird by Harper Lee.  I remember reading the book in school as a kid, and then re-read it last year for our book club.  I hadn't remembered a lot of what happened, and I couldn't have told you the names of the kids or their father, but I remembered Boo Radley.  As a child, he struck a sense of fear in my heart, this spooky mystery man who never left his house.  (I guess I'd forgotten that he actually did nice things for the children, and ended up being the hero in the end!)

6. Share something random about your week.
I've been feeling so much better about myself since I started getting up early to do a little workout and getting my 10K steps each day, but I really seem to have started to take notice this week.  It may not be all about moving more - it may be because the sun is shining, and it's starting to feel more like spring out, and I'm in spring cleaning mode, and I'm feeling good about the purging I've been doing lately.  But I do think that extra half hour in the morning, when I get up and stand in front of my TV and walk along with the DVD, is helping me feel better, BIG time.  I'm still not noticing any weight loss, but just that feeling of being more active, my joints feeling better, an extra pep in my step... it feels good!  Hallelujah!!
Rambled on by Jill at 10:29 am 1 comment:

I don't think "What's Up Wednesday" is a thing, I just keep trying to come up with fancy ways of saying "here's what's randomly going on in my life right now"...

Anyone remember a few weeks ago when I said I caught a cold and had no voice?  Well.  Just get over that one, and I'm hit with another one.  This time all stuffed up and haven't been able to taste in 3 days. What the F.  I went all damn winter almost without so much as a sniffle, and now I get two colds in less than a month?!  However... there are other sickie germs swirling around here that are worse, and I'm praying I don't catch the puke virus that's hit others in this office...  I'll take a double-whammy cold anyday!!!

So, clearly, I'm not loving the sickness and the germs.  But there are things that I AM loving these days...


What are YOU loving this Wednesday??
Rambled on by Jill at 10:44 am No comments:

Looking forward to the weekend

Anyone else feel like this has been a rough week?  I mean, it hasn't exactly been a terrible week, but I've just felt "off".  Not sick, and in fact I've put my Lenten promises into effect and I should probably be feeling better, but... I'm "off".

I think, for me, it probably started with the news of Luke Perry's sudden death.  I'm not going to proclaim to be Luke Perry's biggest fan by any means, but I was a young girl watching Beverly Hills 90210 like most other young girls in the '90's, and I adored Dylan McKay.  Seriously, what young girl in the '90's didn't?  I can close my eyes and picture the white t-shirt with the sleeves rolled, the blue jeans, the shades, the motorcycle... he was my generation's James Dean, and pulled off that ultra-cool bad boy with a soft heart image perfectly.  In recent years, it made me both giddy AND feel old when I saw him turn up as Archie's dad on Riverdale.  Just over a week ago, news broke that he had suffered a major stroke, and on Monday it was announced that he had passed away at age 52.  A little heart-shattering, if I'm being honest.  He was still so young, and those Dylan McKay glory days don't feel so long ago.  It's devastating that he's gone.

That bad news was compounded by Alex Trebek's announcement last night that he has Stage 4 pancreatic cancer, with a dim prognosis despite his vow to fight and beat it.  I heard them saying on the radio this morning that this one hits us hard because we just kind of take him for granted, right?  Jeopardy has been on forever, and Alex Trebek has been a constant in our lives for...well, basically my whole life.  I wish him well and I do hope he's able to beat the statistics and kick cancer's ass. 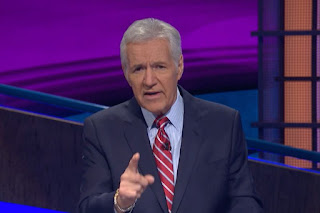 Aside from all of that, it's been a busy week, and I haven't had much downtime, which I - the old single girl forever - crave.  When I HAVE had a few moments to just chill in the evenings, I've been falling asleep.  I've put on the same episode of Game of Thrones three nights in a row, and I have no idea what happens in it because I fall asleep instantly.  I haven't got any crocheting done, and I've hardly had time to even read a few chapters in my book.  I'm blaming this on the "get up early to do a half-hour workout" regime I've implemented this week.  Let's face it:  I'm not a morning girl, and I'm never going to be a morning girl.  Forcing myself out of bed a half hour earlier than usual, while it may be benefiting me overall, has only made me more tired and less productive in the evenings.  I think I'm going to have to adjust bedtime back a half-hour, because I hate feeling so zombie-ish past 8 PM.

Last but not least on my list of crappy things about this week:  the loss of my beloved chips.   Giving chips up for Lent was probably the hardest thing I could do, because I was eating them pretty much every night.  I know the benefits of giving them up far outweigh how hard it is going to be, but oh, how I miss them, and it's only been 24 hours.  *sigh*

Here's the good news:  I have the weekend to look forward to, and it's going to be a good one!

Tomorrow, I'm taking my niece Danica for her "Day Out".  For her birthday back in December, I promised her a day to go shopping, have lunch out, and go to the movies.  We had originally planned for it back in February on one of her PD days, but none of the movies out at that time interested her.  We ALMOST ran into the same problem for tomorrow, but thankfully, Captain Marvel comes out tonight.  I'm not 100% sure she's going to like it, but she does love the show Supergirl, and I think female super heroes are up her alley, so fingers crossed that she'll like it.  I can guarantee that we'll love our lunch at Boston Pizza... I've been daydreaming about that all week!

On Saturday, I should probably be planning to do some house cleaning, but instead, I've designated it as a low-key crochet and TV day.  I am dying for one of those days.  I want to finish the shawl I've been crocheting, and I also want to make some dish clothes for the Irish basket we raffle off at our church's Irish Tea which is next weekend, so... yeah.  Low-key crochet and TV day it is!

Truthfully, the rest of the weekend is free and clear of plans other than church, so hopefully I'll have lots of quality time to just relax.  Next weekend is another busy one, so I'm going to enjoy it while I can.  I should be able to get through the rest of the episodes of Game of Thrones that are on Crave, and then I plan on diving in to Dirty John.  I'm also really caught up in the book I'm reading, The Home For Unwanted Girls by Joanna Goodman, and I look forward to spending time snuggled up and reading.

Truthfully, while the rest of the world rejoices over this cold snap we've had lately coming to an end and warmer temperatures forecasted in the days to come, I'm a little blue that hibernation and hygge days are winding down.  My winter-loving heart aches a bit the thoughts of the cold, cozy days ending.  They just go by so fast, and I miss them so when they're over.  So I'm going to hang on to this weekend of low-key plans and really soak it up. Long live the winter hibernation!! ;)
Rambled on by Jill at 11:05 am 1 comment: