Not Ready to Say Good-Bye...

With the Senators down in their first-round playoff series against the Penguins 0-3, and with the great possibility that they'll be swept tonight in Game 4 on home ice, many people have already forgotten him.

But I haven't. In fact, today, while most Sens fans are praying for a miracle, or already counting our team out and thinking ahead to the post-season changes that are bound to occur, all I can think about is him.

Tonight could very well be Wade Redden's last game in a Senators uniform.

It brings tears to my eyes just thinking about it, but it's true. Earlier in the season, I had hopes that he'd return to the player he was 2 or 3 years ago, carry the team on his back, and lead them to a Stanley Cup this Spring. A few weeks into the regular season, he announced to the local media that he'd even consider taking a pay cut to stay with this team once the season was over. On that day, my hopes soared to new levels.

However, since then, he's had a rather dismal season, and has been the biggest whipping boy on this team, perhaps only bested in that department by the wayward Ray Emery. He's even had to use his no-trade clause twice to thwart GM Bryan Murray's attempts to ship him out of here before the end of his contract.

It's been hard to be a Wade fan this season, but I've hung in there. I'll never cheer for another player the way I have cheered for him.

This morning, all the papers are already saying their good-byes. As the guys on TGOR said this, it's like reading his obituary. Chronicling the ups and downs, the good times and bad, the great things he has done for the community (like "Wade's World", the luxury suite he has purchased every season he's been here where kids from CHEO get to go to watch games), the sad times like the year his mother battled cancer and passed away during the Sens first-round match-up against Tampa Bay.

By stark contrast, I can't help remembering the newspaper I picked up eleven years ago, on the eve of the modern Senators' first appearance in the playoffs, which had row upon row of pictures of each member of the team at that time. I remember scanning the photos, and one of them literally jumping out at me.

"Holy smokes, that guy is hot," I said, pointing out this one picture to my mom.

I watched that playoff round, and became absolutely obsessed with the Ottawa Senators, and that rookie who's photo I had seen in the paper: Wade Redden.

I haven't stopped following his career since, and today, little memories of Wade keep coming back to me: Watching him in that first playoff series vs. Buffalo; meeting him at the 65 Roses Sports Gala (when I got to shake his hand and get my picture taken with him, but could barely speak a work); feeling crushed when he was the last man back on the goal that Jeff Friesen scored in Game 7 of the Eastern Conference Finals when New Jersey beat us; watching him singing "Rudolph the Red Nosed Reindeer" on TV during one of the Sens' Christmas visits to CHEO; tearing up when he scored and received first star honours in the game after his mother's funeral; feeling complete and utter joy when I found out the Sens had chosen to keep him over Zdeno Chara two years ago; meeting his brother Bart at a game earlier this season...

I could go on and on.

But I hope I'm jumping the gun. I'm hoping the Sens fight hard tonight and win, so that Wade will live to don the Red, Black & Gold at least one more night.

'Cause I'm just not ready to say good-bye...Not yet. 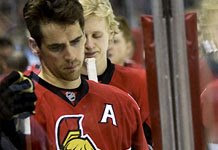 You guys know me. You know how wound up I get over my Sens.

So you probably all know how I'm feeling today - absolutely on edge, butterflies in my stomach, biting my nails, just ready for it all to begin!

That's right, folks: It's playoff time again. Which means for as long as the Senators are in the Stanley Cup Playoffs, I'm at risk of having a heart attack.

Yep, it's that serious.

Starting tonight, we will be facing a familiar foe in Round 1 - the young & talented Pittsburgh Penguins. Last year, we handled them easily out of the gate, taking the series 4-1. Throughout this season, we've had a decent record against them, beating them 3 out of 4 contests. One would think we should be the favourites based on those facts, right?

(Ya shoulda seen that last week, going into Thursday night's game against the Leafs - I was an absolute nervous wreck - as bad as I am at playoff time, if not worse. The possibility of not even making the playoffs was so huge, it was suffocating me! Thankfully, we ended up winning that game against T.O. 8-2, and I was able to breathe a giant sigh of relief).

Last year, the Pens were a young, inexperienced squad, many of whom were playing in their first playoffs. The Sens, as a whole, were playoff vets with tons of past failures to ignite them, not only past Pittsburgh, but also New Jersey and Buffalo. Only the Ducks of Anaheim were able to push us back from the final goal of winning Lord Stanley's Cup.

Doesn't really look like we'll come nearly that close this year. The Pens are strong - they've learned from last year, and this year, they are that much more mature. They played hard down the stretch, while the Sens seemed to fall apart at the seams. Our goaltending situation never seemed to get straightened out, even after Bryan Murray gave Marty Gerber the ball and let him run with it. Our defence has been horrible. Even goal-scoring, our forté, hasn't been happening all that much recently.

Oh. I almost forgot. In that game against the Leafs, we lost both our captain, Daniel Alfredsson, and our gritty, full-of-heart assistant, Mike Fisher. Tonight, they'll join Chris Kelly on the sidelines, and depending on how long this series goes, we may never see them back in the line-up again this year.

OK. So there. I've got all my pessimistic negitivity out. Nobody thinks the Sens can win this series - absolutely no one. But I do!! If I had my choice of all the teams I could play in the first round, I probably would've picked Pittsburgh. I truly believe we can beat them!

We might be without Alfie, Fisher and Kelly, but we've still got Spezza and Heatley and Vermette - big offensive talent there. We brought in three former Cup winners in Cory Stillman, Mike Commodore, and Martin Lapointe - this is where their expertise is supposed to come in handy. And last year, the lauded shut-down defensive pairing of the Eastern Conference was made up of Chris Phillips and Anton Volchenkov. Guess what? They both still wear Sens uniforms.

This team is entirely capable of winning, if they can get it together the way we saw them play in the first two months of the season. This is a chance for a fresh start; a clean slate. If they can pull together and get some momentum going, I believe they can do anything.

I know my faithful readers are out there waiting for a Blog, but I only have one thing to say:

Hmm. That's funny. I don't feel better at all.

The Sens are sucking at the worst time possible, and now we might not even make the playoffs. I'm feeling very doom-and-gloomy today. I know we still have two games left, and all we need are a win & a tie, and we're golden (well...if you can call scrambling to make the playoffs now "golden"...) - but I'm having a hard time getting my hopes up high. We haven't even scored a stinkin' goal in the past 2 games. The last time that happened, John Paddock got fired. Somewhere, he's probably got a smirk on his face.

Our final two opponents are Toronto on Thursday night and Boston on Friday night. At one time, I probably would've said that they'd be easy wins, but not with this Sens team that has been showing up lately. We've lost to both TO and Beantown recently, and I wouldn't count either of them as guarantees.

I'm still waiting for the Sens to come out looking hungry, desperate, and determined. Last night, they played well, but not good enough. Gerber sucks, and nobody trusts Emery. Everything is just going wrong, wrong, wrong...

Let me try it again: