It's all over for the 2009 GOFL season, and unfortunately, the Quyon COMBAT Flyers didn't get the happy ending they were looking for to their otherwise-stellar season.

After Monday night's game 4 was rained out in the third inning, the decision was made to continue it last night, and if a game 5 was necessary, it would be immediately following, in Quyon. Theoretically, this took away home field advantage from the Stittsville 56'ers, but it didn't matter in the end.
The Flyers ended up losing that game 4 by a score of 6-0. They were able to shake off that dismal game admirably and battled hard in the next one, but an early 3-0 lead by the 56'ers would prove insurmountable, and they were only able to cash two runs despite their best efforts. Stittsville won the GOFL Championship by a final score of 3-2.
It was a disappointing end, but the Flyers can hold their heads high knowing they will head into the 2010 season with that much more experience, and they are fortunate enough to already have a berth in the 2010 ISC II Tournament of Champions in Midland, Michigan.
They have truly turned heads this season, gaining great respect and quite a few fans, and by taking the defending champs the distance in the GOFL finals before succumbing, they have proven that they are among the elite when it comes to fastball in this part of the country. 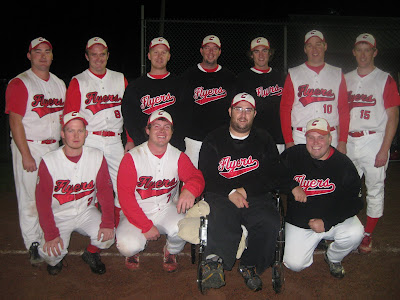 It's been one hell of a season. Thanks for the great ride, guys. Can't wait til next year!
Rambled on by Jill at 11:44 am No comments:

And the Quyon COMBAT Flyers are still playing ball.

It's been a crazy-awesome couple of months, following their succesful journey to the Tournament of Champions in Quad Cities, then back home to their own GOFL playoffs, where they have battled their way to the finals, and also a big weekend that saw them crowned the winners of the 2009 Challenge Cup, awarding them one of the first berths in the 2010 ToC.

It's been an outstanding season thus far. And it's not over yet. 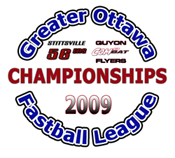 Last night, the Flyers took on the Stittsville 56'ers in Game 3 of their best-of-5 final at the Grove in Stittsville. It was a big game; a win would give them the opportunity to close out the series Monday night before their hometown fans in Quyon.

The 56'ers are a formidable opponent, considering they finished first in league standings this year, with an impressive 17-1-2 record. When Quyon defeated them 4-3 in a tight match up in game 2, it was the first time they beat Stittsville all year.

Last night, it was another nail-biter. Actually, no. I didn't bite my nails, because I had mittens on. It was freakin' cold. But the fans that did brave the frigid night air were not disappointed - it was a tense, exciting game, as it went scoreless for quite sometime - a pitching duel between Stittsville's Dan Bradley and Quyon's Drew Hathway.

Stittsville got on the scoreboard first with a solo homerun, but Matt Greer answered back, hitting his own solo to draw the score even again. After seven innings (and having to witness my boneheaded brother strikeout with the bases loaded in the top of 7...where was that magical homerun when we really needed it, huh?!?) the score remained dead-locked, and we were headed to extra innings.

In the top of 8, Luke started the inning on second base because of the extra-inning rule, and ended up stealing 3rd. Greer hit a sac fly on which Luke tagged and scored, giving the Flyers the 2-1 lead. In the bottom of 8, things pretty much went the same, with the Stittsville player who started on 2nd base ending up stealing 3rd. Then Hathway struck out 2 batters, and it all came down to one of Stittsville's best sticks, Scott Herriot. With the count at 3 balls 2 strikes, Herriot was all set to take his walk, but was called out on a controversial third strike. The 56'ers didn't like the call, but nevertheless, the Flyers gathered at the mound to celebrate the win!

So now, with the 2-1 series lead, the boys will be back in the Q, 7:30 Monday night, and should they win, they will take home their first-ever GOFL Championship title. But if they don't get the W, they will still have another crack at it Tuesday night, back in Stittsville for game 5 if necessary.

Monday night will be possibly the biggest game the Flyers have ever played, so make sure you bundle up and get out there to cheer them on!! I guarantee that if they win, the victory beers will be mighty tasty!!!