Okay, I don't have time to give an in-depth analysis of Grease, which I saw last night at the NAC, but let me just say this:
I love love love LOVED it!! 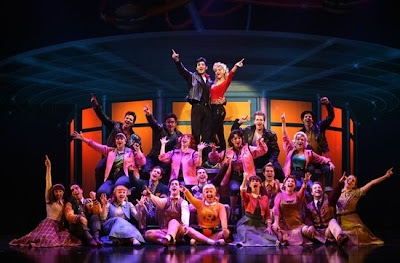 Everything was so energetic and colourful and fun! The costumes and the acting and the music - oh God, the music! It was just amazing!
Of course, I liken sitting in the balcony seats at the NAC to sitting in the third level for a hockey game at Scotiabank Place - you can see the players' numbers, but their faces are just a blur.
Even so - I fell in love with Eric Schneider, who played the role of the studly Danny Zuko. He was really channeling his inner John Travolta - he was awesome!! His Sandy, however, paled slightly in comparison. She was a little too "Disney Princess", as Brenda put it. All of the male performances were great - loved Doody on guitar, and Kenickie was really cool too, especially since we were a little disappointed at the start to learn it would be his understudy playing the role. Understudy-shmuderstudy! The dude was great! Rizzo was my favourite of all the girls - she had just the right amount of edge and attitude and played the part perfectly! 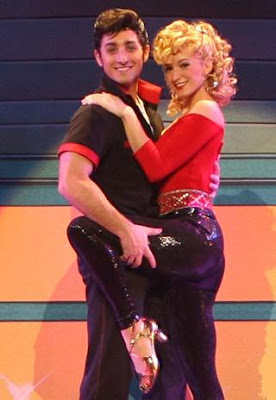 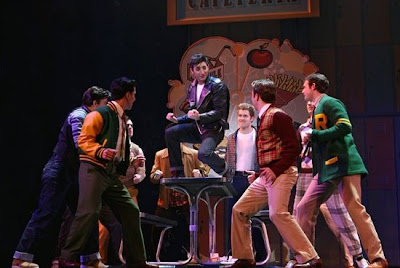 Did I mention the music?? The singing was wonderful, the dancing was stellar...Even Taylor Hicks wasn't so bad as "Teen Angel"!

Oh, and Dominic Fortuna, in the role of Vince Fontaine, was hilarious - he got the crowd hopping before the show started by singing some songs and involving the audience with some dancing and some teasing with a local flavour. ("Stittsville?? Where the hell is Stittsville??")
All in all? Grease was the best. I wish I was going back tonight to see it again!!!
Rambled on by Jill at 9:29 am No comments:

It happens every year.

Late in the winter months and into the spring, concert announcements start popping up for the summer months. Everyone jumps to buy tickets, because every show and every attration is going to be the big one of the summer.

It seems like eons ago that my friends and I jumped at the chance to see Kenny Chesney in August at Scotiabank Place. For big country fans, this would be the "it" concert of the summer. So five of us sprung for the $100.00 tickets, and I know I, personally, thought, "Well, that will be my big expenditure of the summer." 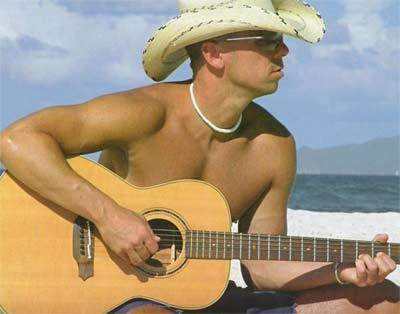 Considered it treating myself. We all deserve a little treat now and then, right?
Then came the news that Emerson Drive was playing Centrepoint Theatre in late-May. Having seen Johnny Reid at Centrepoint earlier this year, I knew I loved the venue, and couldn't resist the lower prices. $30 to see one of my favourite country bands? And the opportunity to get up-close to smokin-hot lead singer Brad Mates, who was so polite and friendly with me in the beer tent at Shawville Fair a few years back? Well, sign me up.
But that! That would be it!! No more concerts for Jill in 2009!!
Well, I'll be damned if the AC/DC concert announcement didn't hit almost as soon as I made that vow. Miss AC/DC?? Are you serious?? NO WAY could I miss AC/DC!! Who knows if they'll ever be back in Ottawa. They're aging rock stars. And I missed the Stones when they came a few years ago, and swore I would never miss out on an event like that again. 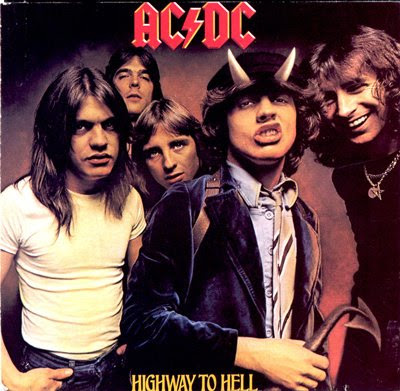 $115.00 for my ticket for the August 10th show. I know, I know. We're starting to talk serious cash here. But I'll be able to say I was at AC/DC. That's worth the admission price on its own.
It was around this same time that Kristen called me at work one day to see if I wanted to go see "Chicago" at the NAC with her. She was getting balcony seats, and promised me I would love love love the musical. Oh hell, why not? Another $77.
While we were at "Chicago", I was so tempted by the posters everywhere for "Grease", which is oming up in late-July. I love "Grease". "Grease" was the first musical I fell in love with, and it will always be my favourite. "Grease" is the word. Kristen told me she'd be in for that one too if I wanted to get tickets. 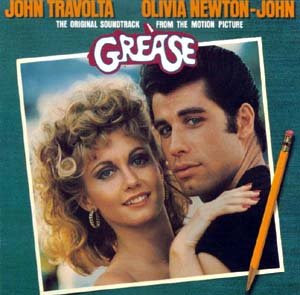 No, I told her. No, I can't afford anything else this summer. I just can't do it.
A week later, I had four tickets to "Grease" ordered on my credit card. Same price as "Chicago".
Last week, Ottawa was buzzing due to Bluesfest. Lots - LOTS - of big names rolling through town, with likely the biggest name being KISS. I somehow managed to avoid it all, although every day I had to resist the temptation to check for tickets on a daily basis. Iron & Wine? OLP? Ben Harper? Joe Cocker? Blue Rodeo? Lynrd Skynrd? Sam Roberts? Steve Earle? I was salivating.
It's a miracle that I didn't succumb.
The other concert that's continually tempting me, but that I've managed to stop myself from checking on tickets for, is Kings of Leon, hitting town in September. I love Kings of Leon. But I'm trying to be strong here. I'm trying to prove that I can say no. I can keep my Mastercard in my wallet. I do have willpower.
I'll let you know as soon as I get my ticket...
Rambled on by Jill at 9:54 am 1 comment:

The summer is flying by. I can't believe it's already July 15th.
Almost three weeks since Michael Jackson's death, and I think the tabloids and press are finally starting to move on from wall-to-wall 24/7 MJ coverage.
And what about Dany Heatley? Oh, still nothing. He demands a trade, then declines a trade, and the news today is that he's dodging Captain Alfie's phone calls. He remains a 5-star douchebag in my books.
Okay, let's talk about the weather. It's gloriously sunny and a beautiful high of 25 out. First day in weeks that it hasn't been cold with a chance of showers, rain, or thunderstorms.
Yeah. So far, this summer blows. At least, weather-wise.
So. I've spared you from my Twilight ramblings during my past 3-week hiatus, and even beyond that. So it's time we dip back into the world of vampire lore.
Except this time, rather than admitting and explaining my deep love for all things to do with Stephenie Meyer's smash-hit literary saga or the first movie it has already spawned, I'd actually like to discuss why I'm stepping back from the phenomenon.
Don't get me wrong. I still adore the books and I'm anxiously awaiting the cinematic release of New Moon this coming November, which will bring to life the second book in the series. And yes, I have a daily circuit of blogs and websites I check for Twilight updates.
But please, whatever you do, don't call me a "Twi-Hard".
That's the term that fans of Twilight have pinned on themselves to distinguish them as the biggest, bestest fans in the world.
Unfortunately, they're starting to get a bad rap. Everyone's making fun of them for being psycho. And I gotta admit - from what I'm seeing and hearing, they kinda are.
Let's take exhibit A: Robert Pattinson, who has shot to superstardom after playing the role of the irrisistable vamp Edward Cullen in the first movie, has literally been stalked by Twi-Hards ever since the movie was released. For the longest time, R.Pattz waved for the cameras, politely signed autographs, and smiled for all the ga-ga tweens, teens, and Twilight moms who surrounded him every step he took.
But for the past month or so, he's been on-set in New York filming his up-coming movie Remember Me, and it's safe to say the novelty of being Edward Cullen has worn off for Rob. Photos from the set have increasingly captured him trying to duck around wearing ball caps, hoods, and dark shades. He doesn't smile much anymore. He looks like he just wants to disappear. 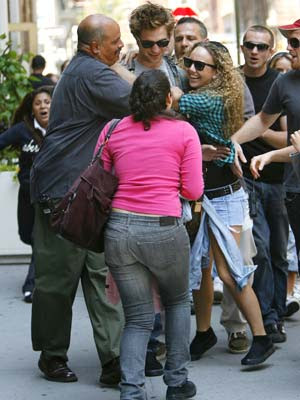 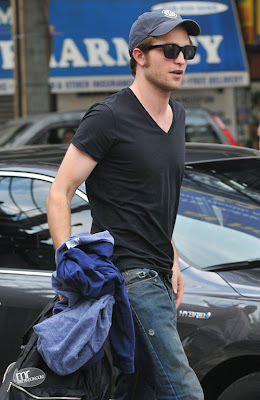 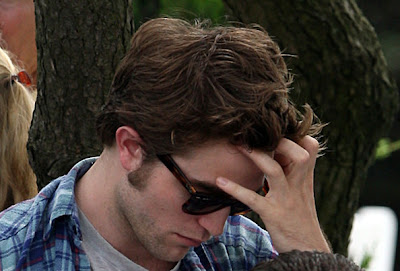 One of the times he did end up in a swarm, a Twi-Hard almost strangled him trying to declare her love.
Uh. Yeah. That's gonna make him want to be with you forever, chick.
Add in the fact that the gossip rags can't seem to let go of this unrelenting desire to link him romantically to his on-screen love, Kristen Stewart, makes me pretty sure the real-life Edward and Bella are wondering what they ever got themselves into.
She is currently filming The Runaways, a biopic in which she plays rocker Joan Jett. I'm not sure when she was last in the same room with Pattinson. She has an alleged boyfriend, and he has allegedly been with every single woman in Hollywood. And yet, they still are determined Rob and Kristen are madly in love. The latest? She's pregnant with their love-child.
Oh, and don't try to tell the Twi-Hards it's all hooey. That gets them realllllly pissed.
Need another example of how ridiculously retarded this group of fans are?
In New Moon, Edward vanishes in hopes of giving Bella back her 'normal' life, and she flounders in the grief of losing her true love. She befriends Jacob Black, a descendant of the Quileute native tribe, who lives on a near-by reservation called La Push, and who we later find out is actually a werewolf, along with a pack of his Quileute brethren.
I know, I know...Just play along, for the sake of the Blog. Okay?
Okay. So, Jake becomes Bella's nearest and dearest friend, and he tells her about how some of the guys go cliff-diving at La Push for thrills. Bella, in the wake of losing Edward, has discovered that the only time she hears Edward's voice in her head is when she's doing something dangerous or risky. And even though his silky-smooth voice is always angry and reprimanding her for putting her life in jeopardy, she craves it. She would do anything to hear it.
So in a very pivotal chapter of the book, Bella goes cliff-diving alone and would have drowned had Jacob not magically appeared to save her.
Still with me?
Here's where the Twi-Hards come in. Not long ago, there was a massive US Coast Guard rescue mission near the real La Push beach in Washington State. It appears some twisted fan of the book made his (yes, it was a guy) way out to an island nearby that had high, craggy cliffs, and then dove into the water below, apparently in an attempt to re-create the scene from the book.
Yep. Some of these people need to seriously remember to take their crazy pills in the morning.
Due to all of these stories, and so many more that I could tell, I would like to thank Twi-Hard Nation for attempting to suck me into their weird world of fandom, but I'll decline. I've been called obsessed by friends before, but I don't think I'd quite make it in the Twi-Hards' league. I am the girl who, upon meeting Wade Redden the one & only time, at a fundraising function, was unable to speak. Literally couldn't say a word. I stood gape-mouthed with my eyes popping out of my head while Brenda did all the talking for me.
Then again, maybe that makes me a whole 'nother kind of crazy.
Rambled on by Jill at 1:11 pm 3 comments: