Heading into the All-Star Break on a High Note

No. The Blog has not become a monthly thing. I'm still here, still trying to find time to write, still waiting for a brain-wave to hit me with a brilliant topic.

But the idea bank has been a little dry lately; a little empty. I've been less-than-inspired thus far in '09.

Not that things are bad...In fact, I'm back on a regular excercise routine, going to both Karate and the gym. My TV shows are all back in action after the Christmas hiatus, and I've been especially pleased with Grey's Anatomy. (Looks like we're finally getting rid of Denny, and the whole "serial killer" twist has kept me interested). I've seen some good movies, had some really good times (the pictures on Facebook lately provide evidence), and had lots of fun playing with Caden and Danica.

So why has the Blog been decidedly blah?

I still trace it back to my pathetically putrid Sens. In looking back on the past few years, it would appear, at least during the winter months, that my post-game re-caps and hockey-related blogs were among the most popular - at least, most commented-upon. This year, without Wade, and with them pretty sucky, I haven't had the heart to dissect them and try to figure out what's gone wrong.

Fortunately enough for them, and for us, they seem to be picking up their socks a little lately, particularly since goalie Martin Gerber was sent to the minors and the Baby Sens' 'tender, Brian Elliott, assumed the role of #1 up in the bigs. Two wins last week, then an OT loss to Montreal on the weekend, followed up by another win last night against Alex Ovechkin and the Washington Capitals has me feeling a little better about the team.

Don't get me wrong. I'm not exactly planning the parade route. But if we could string together a semi-decent second half to the season, would it be too much to hope for at least a shot at the playoffs?

A few weeks ago, I was resigned to the fact that we would be basement-dwellers for the rest of the season, but that the up-side would be having a shot at a guy like John Tavares in the draft, after being dazzled by him in the WJC, right here in Ottawa. I started dreaming of him in a Sens jersey and the glory days that might follow.

Who knows, maybe we'll still get a shot at him. Despite a few wins, I'd hardly say this team has become a bunch of world-beaters. They're just struggling to get by, to score some goals, to regain some respectability.

They're off now for a week - while Dany Heatley heads off to Montreal for the All-Star Joke, the rest will spend time with their famillies or jet off to vacation destinations that have more sun and a HELL of a lot less snow than we have here in O-Town.

At least they've entered the break on a high note, with this recent run of slightly-better games and the memory of stealing a win from Ovechkin fresh in their minds. Maybe, once they're back in action after the break, we can really put that dismal first-half of the season officially behind us and continue with this momentum.

I hope you all had a great Christmas and a very Happy New Year. Aside from breaking my camera (Christmas Eve), and aside from iPod being stolen (New Year's Eve), I thoroughly enjoyed my holidays. Ten whole days of opening presents, hanging out with family and friends, shopping, watching movies, and eating. And eating, and eating, and eating.

Which brings me to my New Year's Resolution...Brace yourselves, I'm sure you've never heard this one before...

Ha! Shocking, right? Bet you never saw that one coming at all.

*sigh* Maybe 2009 will be my lucky year and I'll actually really do it. Yesterday was Day 1 of my "Eat Healthier & Exercise" regime, and I already hate it. Blech. But I'm determined this time. Seriously. I'm proving to myself that I have this little thing called willpower...I had it once, I can get it back. Time to get things back on track before they get too far out of control!

So yeah...Enough of the resolution blah-blah. Now, on to TEAM CANADA!!

Last night, for the fifth straight year in a row, Team Canada wore gold around their necks at the World Junior Hockey Championships. It was pretty sweet this year, with the tournament being held in Ottawa and all the hype surrounding it. And how could one not get all wrapped up in it, especially after watching the New Year's Eve game where they battled back from being down 3-0 to defeat the USA? Then there was the semi-final game vs. Russia, where they were actually 5.4 seconds away from not even making it to the Gold Medal game. When Jordan Eberle scored in the dying seconds to send them to OT, and then the inevitable shoot-out which Canada won easily...Well, I just knew there was something magical about this team. 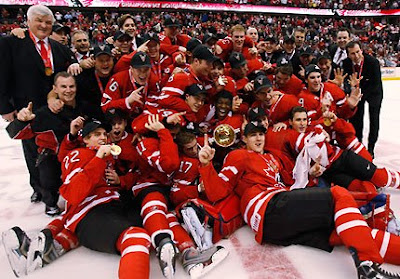 That being said, I still thought they'd be in tough to win Gold against Sweden. From everything I'd heard and seen, Sweden was considered the powerhouse of this year's tourney. Canada barely scraped by Russia, who were beaten badly by the Swedes. It didn't really seem to bode well for Canada.

But...Well, no one should ever count Canada out, especially on home ice.

My gosh, it felt good to watch a winning team. And to feel passionate about hockey again! My poor Sens, God love 'em, just haven't ignited that passion in me much this season. I thought maybe I'd lost my love for the game.

Not so. Those boys that wore the Red & White and played for their country last night reminded me why I've always loved watching this game. They went all out, the whole tournament - all guts, all glory, all the time.

I just hope some of my own players were taking notes. It'd be nice to see some of that youthful exuberance and complete determination out of them once in a while!

Speaking of youthful exuberance and complete determination - the only name that sticks out on the Sens roster as a guy who attempts to bring that every night is Mike Fisher. And check this juicy gossip about our resident team hottie: He's dating Carrie Underwood! And actually has been doing so secretly for months!! 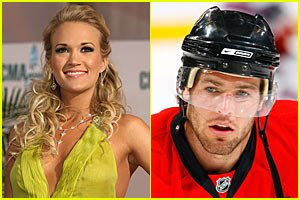 Apparently Ms. Underwood, former American Idol winner and current country superstar, was spotted sitting with Fisher's family in a VIP suite at the Sens/Leafs game on Saturday night. She also reportedly attended Jason Spezza's New Year's Eve party with Fish. The scoop is that they actually met last March, when she was performing at Scotiabank Place in Ottawa. Fisher met her backstage and they've been dating ever since.

I was a little shocked by this news... Mike seems like the least likely on the team to get tangled up in a spotlight-romance. He seems like a genuinely nice guy, so I wish him well with his relationship and I hope it doesn't end up drawing anymore unwanted attention to this sad-sack team.

You can just hear the hearts across Ottawa breaking.
Rambled on by Jill at 10:56 am 6 comments: