Not Enough Pigott on The Border!!

To follow up on yesterday's Blog, I did get to watch my taped episode of the CBC drama The Border, which featured a guest appearance by Sebastian Pigott on Monday night.

I've searched and searched the 'Net for still-frames to show you how Sebastian looked, but I can't find any. So here's a pic of Sebastian acting in a play - the closest thing I could find in pictures. 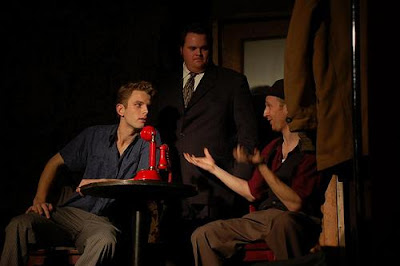 I only could find the actual video for the episode "Articles of Faith" on The Border's website. If you want to check it out, here's the link:

You don't have to watch for long to see him in action - I was thrilled when I caught sight of Seb very early on in the episode. He played the role of Jason Whitmore, a young Canadian border guard, who claimed to have a tip that a van carrying women & children belonging to a fundamentalist religious sect across the border would be also trying to sneak over weapons.

Turns out he was only trying to save an old friend, Rachel, with the twist being he was also once a part to the same extreme Christian group, and was banned at the age of 13. He had received emails from her, and she was telling him she was dreading her forced marriage to an aging polygamist who had many other wives. She used Jason to get her safely across the border, with him under the impression he had to save her from this injustice, but Jason had no idea he was just a pawn in her game to get to her to the ring-leader of their church, her true desire.

It was sort a crazy episode, with lots of twists and turns along the way, but I really enjoyed it. I'm not saying I'll become a regular viewer of The Border - without the Pigott allure, I'm not sure I'm all that interested in the show - but for Canuck television, it was pretty decent.

I had my issues with Sebastian in the episode. For one thing, he didn't last long enough - he turns up dead about 19 minutes in. That sucked big-time. His character actually was a main focal point of the episode, but I didn't get to see nearly enough of him.

That being said, I'm sure it truly was a wonderful opportunity for him to get some exposure as an actor. Even though his screen-time wasn't as great as I'd have liked, he did have an intriguing role to play, and I thought he played it extremely well.

At the very least, Sebastian seemed to take full advantage of his chance to display his talents - the dude is definitely more than just a singer, and I'm positive more acting opportunities will arise thanks to his guest spot on The Border. His portrayal of a scared, stricken young man trying to protect a girl whom he has so much in common with was terrific, and I'm hoping his role as Jason will open more doors for him in television and film.

And I did come to one very positive conclusion - the boy should have to wear a uniform. At all times. He looked absolutely delicious!!

Wish I had a picture to show you - but just in case you've forgotten (like I'd ever let you!), here's one more look at Sebastian: 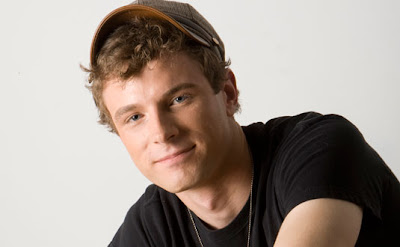 i guess not too many people are interested in Pigott or The Border...sorry Jill

lol...No, not here I guess. You guys just haven't caught the Pigott bug at all. The people on the fan page on Facebook were pretty pumped about it though! He does have fans other than me! haha

Hey. That has nothing to do with my Blog topic. Away with you, evil Habs fan.

(I assume you are Brenda? lol)

Anonymous said...
This comment has been removed by a blog administrator.
11:41 pm

Anonymous said...
This comment has been removed by a blog administrator.
2:26 pm

Anonymous said...
This comment has been removed by a blog administrator.
7:55 pm

Anonymous said...
This comment has been removed by a blog administrator.
5:38 am

The prescription antibiotic Zithromax must be used to treat various common infections, for example , bacterial infections and sexually transmitted diseases. By decreasing bacteria's ability in order to create protein and affecting peptide activity, the medicine can certainly help to stop bacteria from continuing to stay at and cause infection chemistry. Zithromax enters in either tablet form or when you're a liquid suspension and is defined as licensed to be used in both young and old.