As many of you already know, I became a mommy this summer.
A mommy to two beautiful little goldfish.
The day I met my new fish was the day of our annual Mountainview Golf Tournament. I wasn't having the best day, and I couldn't wait to leave the golf course and get to the ball field in Carp, where the Flyers were playing in a tournament. But first, I had to stop in at home and pick up Sue, Sarah & Brenda.
Little did I know they had a surprise waiting for me - my birthday gift was a tank, already decked out, with my little Presley and Marley swimming happily away in it!
I was so happy I almost cried. 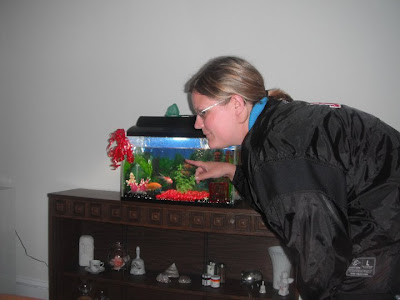 Finally, I had my fish that I'd been wanting for months. And they were so pretty!
Unfortunately, Presley didn't seem to be doing so well. Each day, he got more and more strange. He stopped swimming around quickly (and he'd been pretty zippy that first day, so I knew something was wrong). He kind of just floated in a corner behind one of the little fake plant thingys. When I put food in, he didn't seem interested. And he just looked bad - he always seemed to be gasping or something.
But I've never had fish babies before, so I wasn't sure. After a few days of watching the fish hide in the corner, I thought, "Maybe I need to shake him up." So I stuck the net in the water, scooped him up, shook him a little, and dropped him back in.
Worked like a charm! He swam around like a maniac!
The next day? Not so much. He was kind of dead.
Apparently, signs of fish distress are hiding, not eating, and gasping for air. Ways to avoid distressing your fish? Don't net them.
Ooops.
So that left just Marley, the bigger, heartier looking goldfish. I worried about him quite a bit those first few days after Presley's death, but he actually seemed to start doing better. He swam around more and got really excited when I put food in the tank. Marley was thriving. 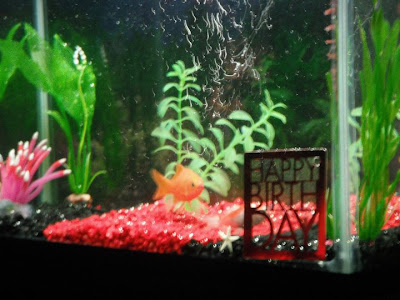 But still, I worry about him being all alone in there. Okay, I know - fish only have 3-second memory spans. He doesn't even notice that he's alone in there. He doesn't care.
Even so, I've been wanting to get him a new friend. And that's exactly what I'm going to do tonight. Tonight, I'm going to pick up Marley's brother, and I'm going to name him Jackson. He's going to be a black goldfish with big bulgy eyes. Ugly little mofo. But that's kind of how I've been feeling lately, and I think Jackson will make a lovely addition to my fish family. 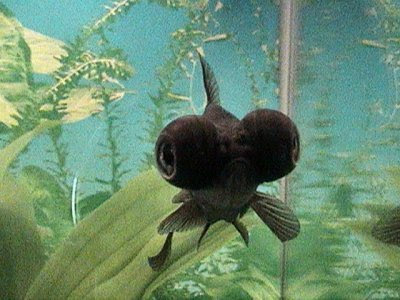 Hopefully he lasts more than a week.
Rambled on by Jill at 9:42 am

eek - jackson is scary looking...the name suits him well though...haha! Does that mean that Jackson will have the same birthday as ME???

He is scary looking, and he's going to fit in so well! lol If I get to the fish store on time, he will officially share your birthday Stace! I may nickname him "Johnston"! hahaha

Jackson Johnston (JJ for short) sounds perfect for me and he is also now a "FAIR BABY" and shares my birthday and your "new" birthday...woo hoo!!

OMG he's kind of scary looking Jill. Do they get along? I hope he lasts. Good luck.
nancy

Geez... whoever decorated that tank must really think you are special.. Sens colored stones.. really... Personally I think that blue and white stones would create a much more aquatic atmosphere for the fishies - just my opinion!

Jacksie is a trooper - and so is Marley after I over-dosed the tank last night with a purifying treatment! Whoops! Both still swimming this morning, amongst the lovely Sens-coloured rocks!! ;)

Wow that's kinda stupid shaking a fish. And I don't think that "ugly mofo" formally known as a Black Moor will do so well. First off, he isn't scary, he is beautiful, Second, he is almost blind so make sure there's nothing sharp in the tank and since your fish has better vision Jackson might starve. Do your research.

Oh my God. I think I just got my first hate mail on my blog. For the record, Jackson has been around for almost 8 months now, and has managed to avoid all sharp objects in the tank, like the sharp sticks and knife blades I put in there. He also seems to be getting plenty to eat despite being almost blind. Thanks for your concern.

Hi Jill - I'm a stranger, of course, and got here when doing some goldfish research because I had a black one that looked exactly like the one in your photo...until he suddenly turned white and the algae eaters started nibbling him (I'm not sure which started first), and sadly, he was dead a few days later. Anyway, no more on that (since your blog isn't about goldfish ailments), but I just wanted to say, I, too, had heard about their 3-second memory, and believed it until I started reading about goldfish. Nearly everything I thought about goldfish and have done to take care of mine was wrong (partly because I was misinformed by the pet store clerk!). How did I let myself start into this without reading up on it first?? Anyway, there's tons of info out there, but this is where I learned the truth about a goldfish's memory...
http://en.wikipedia.org/wiki/Goldfish#Intelligence