Have a Holly Jolly Christmas!!

It's the Eve of Christmas Eve...Last night, I kept waking up and having trouble falling back asleep. I go through it every year. The excitement starts bubbling up inside me and my head is just swirling with thoughts of food and gifts and family and friends and music. It is, indeed, the most wonderful time of the year!

But, there's still a little paranoia mingling in there with all the joy and cheer. A fear of falling ill (especially after Chris had the flu on the weekend), and the dread of rain on Christmas Eve (how can it be -17 today, and + 3 tomorrow?!) I know most of the gang around here are praying for rain, as any great snowfall accumulation means they have to go to work on Christmas Eve and Christmas Day. That would definitely suck. My greatest concern with the weather, though, is that Kara has said if the weather's bad tomorrow, they won't be coming up to spend the night Christmas Eve.

I haven't even seen Baby Danica since last Thursday. I keep lamenting to anyone who will listen that I might not get to see the kid again until she's 9 months old, at this rate. I feel like I'm missing out on all the cute, adorable, newborn-ness.

People remind me continually that that pretty much consists of sleeping, pooping, breast-feeding, and more sleeping.

But I still want to just hold her and snuggle with her, and make sure she knows who I am!!!

So as the hustle and bustle of the Christmas season escalates, I'm praying for docile weather and for safe travels for families who are trying to get together for the holiday season - whether it be a half-hour drive, or a cross-country flight.

One Wait is Over, the Other Just Beginning...

In the past few weeks, I have told you about all the waiting going on this December for my family - not just for Christmas, but also for the birth of my sister's baby.

Well, one of those waits is over. And it's not December 25th yet, so you guessed it - the baby finally arrived!

On Monday, December 15th, 2008, at 11:52 AM, Danica Hazel was born, weighing 7 lbs. 2 ozs., measuring 19 3/4" long. I have an absolutely adorable little niece to snuggle & spoil! I visited Danica Monday night, when she was about 7 hours old, and she was the most precious little thing. Her big brother is also pretty fond of her too, reminding everyone when he gets a chance that she is HIS Danica and that she's "sweeeeeet"!! 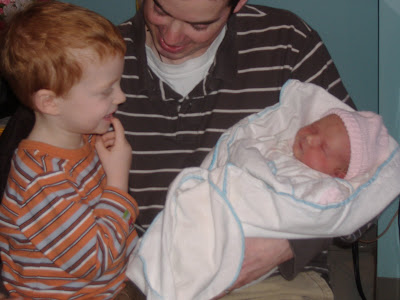 I couldn't agree more :)
So now, a week away from Christmas, the added excitement of having a new little bundle around for the holidays has me even more anxious for the holidays! One more week...So soon, yet so far away! In the days leading up to Christmas, I intend on savouring every wonderful moment - the wrapping, the building Gingerbread houses, the gift exchanges, the food, and the music. And, of course, Danica. 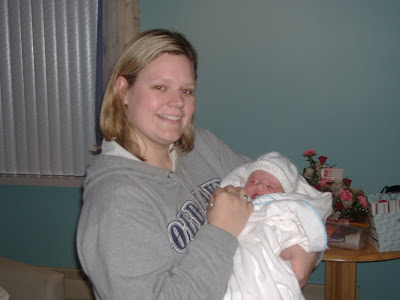 Forget the 'Staches...Check out those ABS!!!

Today's Blog was supposed to be about the Ottawa Senators (woeful as they may be), and how much I hate their mustaches. Because the '08-'09 Sens, amidst a less-than-inspiring season thus far, decided as a group to start growing 'staches to enhance team bonding or team spirit or some crap like that.

I believe it was Dany Heatley's dumb idea, and most of them are now growing hairy caterpillars above their upper lips....

Or not. Some, like Jason Spezza, have sorry excuses for a mustache, puny little whiskers that you can barely see. Others, like Shean Donovan, are refusing to partake. He says he'll start growing his someday...Truth is, Shean's wife probably knows they all look like goofs and is forcing him to shave every morning. Can't say I blame her.

The only "reputable" 'staches I've seen so far are belonging to Martin Gerber, Chris Phillips, Chris Kelly, and Antoine Vermette.

Ah, Antoine Vermette. Ya see? Right there. That's where this Blog got sidetracked.

I went searching for photos of some of the mustaches, but was coming up empty-handed. So I started Googling those names above to see if I could find some image results with them sporting their new (God-awful) facial hair, and again, I couldn't find any photo evidence to add to the Mustache Blog.

But when I typed in Antoine Vermette's name, I quickly forgot about the Fu Manchus. I found these pictures instead: 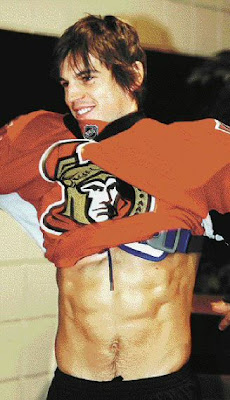 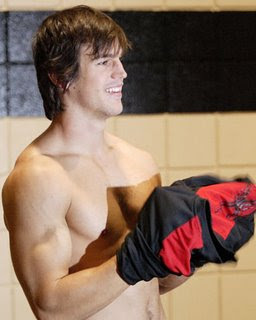 Why have I never seen these pictures before?!?! Why was I wasting my time on Wade Redden all those years?!?! (Okay, I take that back, Wade had a pretty hot physique himself...But he's gone now...Time to move on, right?!)

I hereby declare that Antoine Vermette is no longer allowed to wear a shirt. Ever. Not when he's off the ice, not when he's on the ice...NEVER!!

A body like that should not be covered up. It should be on display at all times, for gals like me to drool over. That is just the most beautiful male form I have ever seen with my own two eyes!

So yeah...You don't get any pictures of ugly mustaches. But somehow, I don't think the female fans of the Blog out there will mind!!

The Season of Waiting...In More Ways than One!

You all know just how much I love this time of year, right? I love Christmas - I love the holiday season!!

After this latest fresh dumping of snow, I'm definitely in the Christmas spirit. There are holiday parties and festive gatherings galore in the weeks to come, and I'm super-pumped. I finished my Christmas shopping last weekend, received my last parcel from Amazon in the mail yesterday so I'm ready to wrap, I've been watching holiday specials each evening on TV, I have my Christmas cards ready to drop in the mail today...Jeez, I even did a little (easy) Christmas baking on the weekend!

The problem? Well, that overly-anxious butterfly feeling I get every year in the last couple of days before Christmas Eve? It's hit early this year. I've already got it. And it's only flippin' December 10th!!!

The difference is that this year I'm not just waiting for Christmas. There's another special upcoming event that has me twisted into knots of anticipation and excitement.

Any day now, my new niece or nephew should be arriving!

For the record, the due date isn't until tomorrow. So really, I shouldn't be so wound up and wondering why the little one hasn't decided to join us already. The thing is, my sister Kara and her husband Chris surprised us the last time when they called to say baby was on the way 10 days early. It caught us all off-guard, but it was a wonderful time, and I can't wait for it to happen again!

This time, however, it's a little different. We didn't have to do this sitting around & waiting business before. I much prefer the slightly-early "shock arrival" than this thumb-twiddling, let's-get-the-show-on-the-road stuff!!

I know, I know. The baby will come when he or she is good & ready. And there's nothing I can do to speed up the process. I just have to wait impatiently to meet the newest member of our family. And when the baby does arrive, it will be well worth the wait, I'm sure!

The thoughts of Christmastime this year, with a new baby to snuggle and the added excitement of having not one but TWO little ones at our house, has me looking forward to the holidays like never before.

I might have to start Sharon's "Twelve Days of Christmas" Drinking Game early this year!!!
Rambled on by Jill at 9:15 am 2 comments:

Murder at the Sugar Shack Cafe!!

Yes, folks, it's that time of year again. It's time for me to offer up my annual report on the Murder Mystery!

This year, MM meant a little more to me. I've acted in it twice before, and last year I helped out behind the scenes, but this year, I was actually directing it.

Not without a great deal of help, though.

First of all, I'd have been lost if I hadn't had my co-director, Brenda, keeping me on track. She deserves heaps of praise for not losing her mind while dealing with me and my daily doses of sheer panic. She found wigs and costumes for some of our performers, doled out tons of funny lines for them to use on stage, came up with countless props and decorations to be used in the hall...That's only grazing the surface of what she did!! Did I mention she had to deal with me, the WHACK-O!?! Yeah. Her job was not easy!

We also had help from Donna & Lynn, who have been involved with the directing and behind-the-scenes work for the past 15 or 16 Murder Mysteries. Then there was Barbara, who has been responsible for tickets sales for years, and she was there for us once again this year. And last but not least, big thanks to Rolly, who takes on the task of creating absolutely amazing back-drops each and every year. He adds a special touch to the set, and the Sugar Shack Cafe looked outstanding thanks to him!!

This year, everyone was invited back in time to the '60's, to the Sugar Shack Cafe, where popular high school cheerleader Patti - (ohhh yeah - Brenda played that part as well after our original "Patti" bowed out...Did I mention how invaluable Brenda was??) - drank a poisoned Cherry Coke and dropped dead.

Eight of her high school peers who were present at the time of her death became suspects, and after being interrogated by the QPD's singing policewoman, Mara Landers (yours truly), they spent the next few hours accusing one another and making the packed hall roar with laughter. 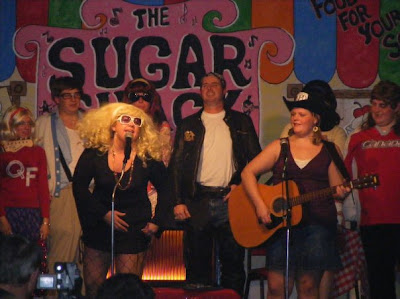 (The cast & I on-stage - Photo courtesy of Cheryl Dolan)

After the characters tossed out multiple motives for one another throughout each scene, it was finally determined that poor Lauren, the sniffling, snorting brainiac of the bunch, was the one who slipped the poison in Patti's Cherry Coke, thus ending yet another year of murder & mayhem in Quyon!


Let me tell you this - they were unbelievable. An excellent cast. I couldn't have been more proud of them. They came up with zingers that had previously been un-rehearsed that had the crowd in stitches. They had strong characters, and this year, we had some twists that set us apart from other years: We had a group dance to kick things off, and we had some singing throughout the play that the audience really seemed to enjoy.


Overall? I'd have to call it yet another successful Murder Mystery, and I'm grateful to the Quyon Lionettes for giving Brenda & I the opportunity to run it this year. I think I can safely speak for both of us when I say that we had a ball!
Rambled on by Jill at 10:06 am 2 comments: