Last Thursday was the Kings of Leon concert at Scotiabank Place. I ordered the tickets a few weeks ago, based on how much I liked only a handful of songs that I'd heard. Otherwise, I knew nothing about Kings of Leon, and I was worried that my lack of knowledge about them and their music would equal a big waste of money.

I couldn't have been more wrong. Not only was the concert amazing, I came away with an even greater appreciation for the band, their sound, and their songs. I knew I liked them before I went in the doors; when I came out, I was a huge fan.

Opening band Glasvegas was about the only low-light for me. They kicked off the night with what I considered a dark and dreary set. And I SWEAR I could be their drummer - anyone could do what that chick did, it was like the easy level on Rock Band. Nothing they did impressed me. Not one of their songs was my kind of thing. Seriously, Jumpin' Jimmy at the Barley Mow's open mic night (where we had dinner) was more entertaining.

But that didn't matter, 'cause when KOL hit the stage with an eerie opening performance of "Closer", Glasvegas were already out of my mind. They killed it with their southern-rock with its very own unique flavour. Whether hearing new songs that I now can't get enough of, like "The Bucket", "I Want You", "Four Kicks", and "Be Somebody" - or getting lost in the songs that were already my favourites, like "Sex on Fire", "Fans", "Notion", and my ultimate #1 "Use Somebody" - I was never disappointed. 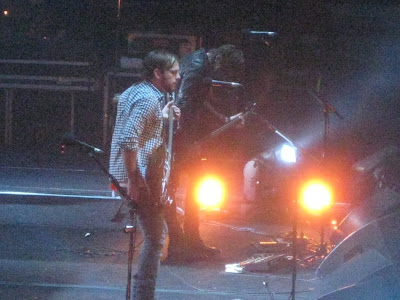 I also was introduced to their song "Cold Desert", a slow-moving, climax-building tune that had fans on the floor crowd surfing - I just can't stop listening to it. Love it. Love it.

Doesn't hurt that band members the Followill brothers and their cousin aren't too hard to look at, either...

So that awesome Thursday night concert kicked off what was to be an even more awesome weekend, as the Quyon COMBAT Flyers, fresh off their win to advance to the GOFL finals, were taking part in the Challenge Cup tournament in McNab/Braeside on Saturday and Sunday. The winning team would secure an early berth at the 2010 ISC II Tournament of Champions, slated to run next August in Midland, Michigan.

The Flyers ended up gaining the benefit of a schedule change when their first-round opponent Napanee bowed out of the tournament at the last minute, earning Quyon a bye through to the 11 AM game versus their league rivals, Carp I4C Victory. The handled them easily, taking it 7-1 with Chad Hargrove getting the win on the mound.

That jumped them right into the 'undefeated game' at 5 PM against the North Fred Kings (from the Kingston area). Buzz around the ball park was that North Fred appeared to be the team to beat, as they had already defeated two of the best teams in the tournament, Team Easton and the Donnacona Blue Sox. Regardless, the Flyers again made it look easy, with the final being 5-1 and Drew Hathway was the winning pitcher.

That win advanced the Flyers to the finals. As the undefeated team in the tournament, they had to be beaten twice to lose the tournament, a double-knockout format. Once again, the North Fred Kings were their opponent, after they had gone on to defeat Carp to make the finals.

Two games weren't needed to crown the Flyers as the champions - in fact, only 3 1/2 innings of the first game were necessary, as North Fred seemed to finally run out of gas. One of their players was ejected from the game, and all of their substitutes had been used, so they were forced to end the game with the Flyers ahead 7-3, and pitcher Joran Graham got the W.

So next August, the Flyers will be headed to Midland, Michigan, and they have the honour of being one of the first teams to qualify for the 2010 ToC! Congrats, guys! 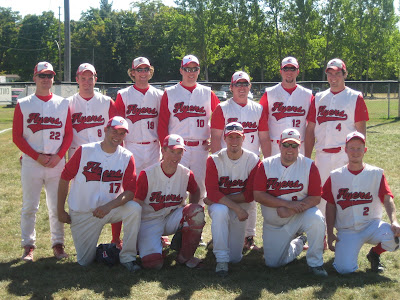 Things sort of came crashing back down last night, however, as the Flyers lost the opening game of their best-of-5 GOFL finals to the Stittsville 56'ers. They actually jumped out to an early 1-0 lead in the game, and they held that lead for a few innings before Stittsville discovered their bats and ended up mercying them after 6 innings, with a final score of 7-1.

Hoping for better luck on Thursday night in Quyon, game time 7:30 - come out and cheer on the hometown team!!

To say it was cold at the ball park in Carp last night would be an understatement.

It was frickin' freezing.

But was it worth it to sit out in the frigid night air and literally turn into a popsicle, just to see the Quyon COMBAT Flyers beat Ottawa Team Easton 8-3 in 9 innings to take their semi-final series 3-2??

The boys kept me busy by giving me the job of keeping Joe (still in hospital) in the loop via BlackBerry messages, and in the third inning I somehow inherited the position of scorekeeper as well. I actually feel like I barely saw any of the game - so many times, I was left to ask Mom & Dad, "OK, what just happened?" Between Joe asking questions and me trying not to sound like a retard in explaining to him what was going on, and attempting to keep the scorebook accurate, I hardly had time to actually watch the game.

But thanks to my jobs, I pretty much can tell you every detail of last night's game!

Thanks to back-to-back triples in the second inning by Steve McCord and Curtis Daley, Quyon took a 1-0 lead on Easton. They answered back with a run of their own, so at the top of 6, with the score tied, Easton pulled ace pitcher Corey Costello from the game, replacing him with Brad Porter.

Extra innings were necessary with the score still tied at 1 after 7. In the top of 8, Quyon scored 2 runs, but Easton again pulled even in the bottom of the inning. It wasn't until the top of 9 that Quyon finally took command of the game. With a runner placed on second to start the inning (the rule during extra innings), Shawn Laframboise singled, bringing my own darling brother to the plate. Magically - somehow - I didn't think he was capable of it (haha) - Luke hit a homerun!! His bomb brought in three runs, and with no outs, the Flyers weren't done yet. Two more runs scored, giving the Flyers the huge 8-3 lead.

Easton never really threatened in the bottom of 9 thanks to stellar pitching by Drew Hathway, who threw all 9 innings for Quyon. And just like that - the Quyon COMBAT Flyers advance to the GOFL finals for the first time!!

I'm so excited for the guys - what a thrilling game, and the promise of more ball against the Stittsville 56'ers in the Finals makes me a very happy kid. I wasn't ready yet for ball to end...

But as I said last night - might have to break out the snowpants for the Finals!!!

So Much Going On!!

It's been awhile since I've been on to update...Here's the scoop on the Quyon COMBAT Flyers: They are currently playing Team Easton in the GOFL semi-finals, with the best-of-five series tied at 2 games apiece. Last night, they had the opportunity to put the final nail in Easton's coffin, but unfortunately, they ended up losing 2-0. Due to injuries from an accident over the weekend, catcher Joe McCleary is out of the line-up, and the Flyers would really like to win this for him. The final game of the series goes tonight in Carp at 8 PM - should be a good one!

Still with the sports - the Ottawa Senators started their pre-season last night, opening up with a 3-1 loss to the Florida Panthers. Sens fans had their first peek at new goaltender Pascal Leclaire, who was acquired last season at the trade deadline; however, due to injuries, he was unavailable to play until now. Considering the guy hasn't seen NHL action since last January, and was replaced half-way through the second last night by Robin Lehner, I would say no one should be jumping to conclusions about Leclaire's capabilities based on his first appearance in net this year. Once he settles in and gets some more action, we'll see what this guy is all about.

On Saturday, the Senators finally got rid of the summer-long circus that was Dany Heatley. The former fan favourite had demanded a trade, and became one of the biggest hockey villains this city had ever seen - right up there with the likes of Alexei Yashin and Ray Emery. It's such a relief to no longer have to listen to and read about the Heatley Saga. Shipping him off to San Jose in exchange for Jonathan Cheechoo and Milan Michalek might not have improved the talent on this team, but it got rid of a cancer in the dressing room and one of the biggest egos in the NHL. Farewell, Dany, hope I never have to hear your name mentioned again!!

In other news, the death of actor Patrick Swayze at age 57 is in all the entertainment headlines this week. Swayze passed away Monday after a battle with pancreatic cancer. I had heard of his health struggles, but for some reason, I was still shocked to learn of his death. How many times have I watched Dirty Dancing and Ghost, and literally drooled over the man? Doesn't seem right that he's gone... Once again, another star has left too soon.

And last but not least...Yes, I did it. I got tickets to Kings of Leon. I swore I wasn't spending any more money on concerts this year, but the temptation was too great!! The concert is tomorrow night at SBP, and I can't wait!! I'll be sure to give a re-cap on Friday. :)
Rambled on by Jill at 11:01 am 5 comments: